The history of pewter in America goes back to the early colonial period.

Pewter is an alloy composed mainly of tin with various amounts of lead, copper, zinc, antimony, and bismuth. Several early civilizations, the Chinese, Egyptians, Greeks, and Romans, are known to have used this soft metal. In England, pewter regulations were passed as early as 1348 in London for quality standards, working conditions, and selling restrictions. This was followed in 1473 by Edward IVs grant of a royal charter to the 'Minister of Pewterers' to supervise and control the trade throughout the Realm.

Though pewter was then considered to be somewhat of a luxury item, it had made its appearance in Jamestown, Virginia by 1610, and in the New England area by the 1630s as newly arrived colonists brought pewter with them from their native England. At least five pewter smiths were active in the Massachusetts Bay Colony by 1640. These pewterers had trained in England under the strict auspices of The Worshipful Company of Pewterers, a powerful guild which so stringently regulated all aspects of the manufacture of pewter that English pewter was regarded as the finest made.

England's mercantile policy was to export only finished pewter products to her colonies, to tax un-worked pewter and to prohibit the export of pure tin, the main ingredient in pewter. Thus, colonial pewter smiths were restricted to repair work or were forced to buy up worn pewter vessels at fifty to seventy per cent of their original cost and to melt them and cast them as new items. In daily use, pewter in eighteenth century America is estimated to have lasted only ten years due to its low melting point and the ease with which it was dented. However, the demand for pewter was always great and colonial pewter smiths could sell their wares more cheaply than imported English pewter.

While the very poor used wooden utensils, most colonials who could afford it used pewter; and it came to be regarded as almost a symbol of gentility. Though pewter vessels cost only about one-tenth the price of silver, they were still fairly expensive since the cost of a dish or tankard equaled or exceeded what a skilled craftsman earned in a day. A study of English export records by Robert W. Symonds revealed that by 1720 "the value of pewter imports from England began to exceed the combined totals of the value of silver objects, furniture, upholstery wares, including bedding, curtains, carpets, hangings, and upholstered furniture ." More than 300 tons of English pewter were shipped to the American colonies annually in the 1760's.

The touchmark is used to identify pewter smith houses.

As did silversmiths, many pewter smiths identified their works by stamping their pewter with a mark called a touchmark or simply a touch. While English touch designs, such as the rampant lion, were popular before the War for Independence, afterwards the patriotic American eagle was often substituted. After about 1825 the originality of the decorative touches declined radically to simply the pewter manufacturer's name in a rectangular frame. The collector of American pewter is presented with a multitude of problems in identification, for not all touchmarks have yet been linked to a specific pewter smith. Numerous touchmarks have been rendered illegible through wear, and many pieces were never marked in the first place since it was never required by law.

Pewter was marked not only by its makers but also often by its owners. Owners would stamp or engrave their initials on their more important pieces of pewter and this would serve as identification should the pieces be borrowed or stolen. Important families even went so far as to have family crests or coats of arms engraved on pewter when they purchased it.

American pewter was made by casting the molten metal in molds.

In the seventeenth and eighteenth centuries American pewter was made by casting the molten metal in molds which were usually made of brass or bronze. Molds were very expensive and immigrating pewter smiths often brought their molds with them from England and Germany. However molds were produced in America as well. These would then be passed down from generation to generation of pewter smiths.

One tankard required five separate molds, one each for the body, bottom, handle, cover, and thumb piece. Showing great ingenuity, pewter smiths often used one mold for a variety of purposes.

Early American pewter is noted for its simplicity of style. The difficulty and expense of obtaining molds resulted in a slower stylistic evolution than that of silver which did not require molds for its manufacture, though the general design trends in silver were eventually reflected in pewter. Because pewter was a far softer metal, a thicker construction was often used as a means of increasing durability. Further, pewter's basically utilitarian nature discouraged excessive ornamentation. 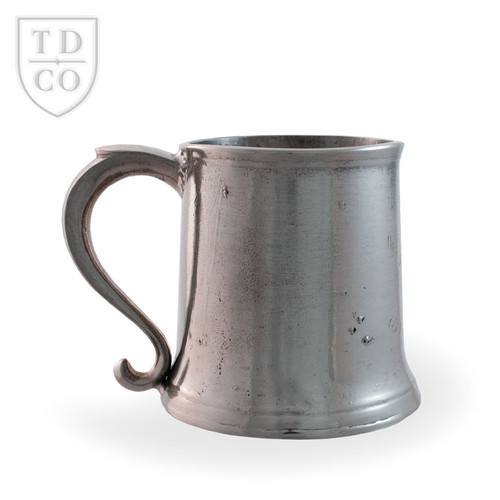 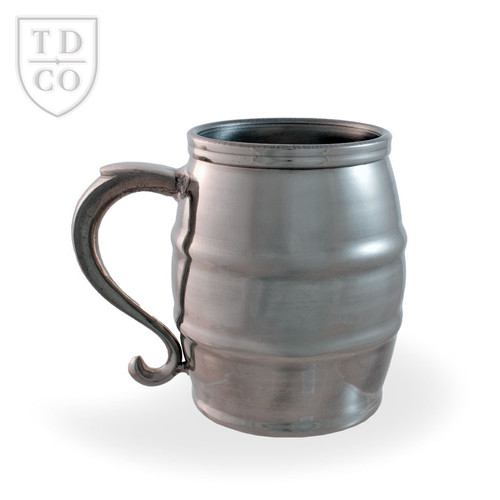 Near the end of the eighteenth century a new type of pewter, Britannia, was introduced from England.

Harder than regular pewter, Britannia was an alloy of tin, copper, and antimony but was without any lead. It was easier and faster to manufacture, for it could either be more thinly cast or it could be stamped or spun from sheets of the rolled metal. This also meant that the style could respond to the dictates of fashion as quickly as silver.

In fact, Britannia came to resemble silver, especially in brilliance and shape, more than it resembled traditional pewter, with the notable exception of price. It was exceedingly popular until about 1850 when the process of electroplating was introduced whereby a thin coating of silver could be applied to cover the Britannia or other metal.

Over the next twenty years Britannia makers and pewter smiths either gradually shifted to the manufacture of silver plate or went out of business. This was due to the competition from the ever-increasing popularity of porcelain and other pottery wares as well as the finally overwhelming competition from silver plate.

Considering the amount of American pewter which once existed, little has survived to the present.

The former advantage that damaged or worn pewter could be melted down and recast has robbed us of a complete view of the development of pewter in America. Also, during the War for Independence many donated their pewter to be cast into musket balls.

But the special allure of pewter was recognized even as its popularity declined. In 1839 an old pewter beaker was the first recorded object given to the New Hampshire Historical Society. And today we continue to collect and honor works of this soft-luster metal which played such an important role in the early history of this country. 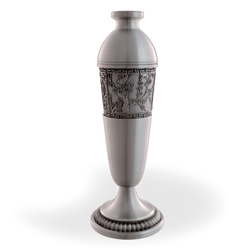