Save 30% on all crystal products through Feb 8th. Discount will applied in cart. SHOP NOW

Pewter has been a part of civilized man for over 560 years now, making it a mainstay in the American lifestyle since day we first colonized here. At the Thomas Dale Company, pewter is the passion that drives our business, be it spun or cast, each piece is inevitably hand made in one form or another, just as it was since its inception. Older and modern pieces, each style of collecting has a broad support base, because of its unique facet in time, history, and beauty. Pewter has quickly become preferred over silver because of its beauty, low maintenance and cost. It is a solid alloy not a plating, so its beauty is more than skin deep.

There are two basic types of pewter, spun (such as plates by Boardman, Salisbury, or Woodbury) and cast pieces (such as plates by ASL, and everything by Artina). Spun pieces are hand spun on lathes. Cast pewter pieces are generally heavier than spun pieces, as molds need room for the pewter to flow into. Cast pieces have the ability for a pewter smith to create intricate scenes with fine detail.

Pewter is well known, as a metal alloy, for being versatile, utilitarian, and above all else, beautiful to look at. Made from a mix of approximately 90% tin and other metals such as copper, antimony, bismuth and sometimes traces of silver, pewter is a soft and moldable metal whose beginning trace back as far as Ancient Rome and Egypt. In ancient times, slight amounts of lead were used instead of antimony, but fine pewter products of today contain no traces of lead.

The earliest known pewter to have been found, came from China 2000 years ago. Other, early examples of pewter date back to findings from an Egyptian tomb in c. 1450 BC, and it’s thought that pewter castings were forged alongside bronze counterparts in the Bronze Age in the Near East.

Throughout the Middle Ages and during the Renaissance Period, pewter was produced and used commonly by nobles and wealthy families. Uses included home décor, but also utensils, drinking vessels and more.

By the 18th century, porcelain and fine China gained in popularity, and then by the Victorian Age, silverplating practically replaced all pewter items from dining tables and serving sets. Pewter was then found in more decorative items, with some of the most unique and stunning pieces produced during the Art Nouveau and Arts and Crafts periods.

To this day, Pewter remains popular as a collected traditional gift item, and as service ware material. Available in several different finishes, you may find fine pewter in tankards, candlesticks, goblets, frames, platters, and more.

The Quaich – Scotland's Cup of Friendship

The quaich (pronounced Quake) has been used throughout the centuries to offer a welcoming drink at family occasions, and between friends and visitors. The Scot word, quaich, is derived from the Gaelic "cuach" and means "shallow cup." The cup of a quaich is a simple shallow bowl with two handles, known as "lugs."

Originally, quaichs were mostly used to contain whisky and brandy, while the larger quaichs were used for drinking ale. From these humble beginnings, the role played by Scotland's cup of kindness has grown to be an integral part of many important celebrations, while the cup itself has kept its simple and beautiful design.

This story begins in Nuremburg Germany with a young girl who fell in love with a goldsmith, of whom her Nobleman father did not approve. His daughter's ensuing broken heart caused the Nobleman to come up with a proposal. To the goldsmith, he charged, "Devise a single cup from which two people can simultaneously drink with no spillage, and you may wed my daughter."

The skilled craftsman crafted a masterpiece of a cup, one that included the form of a beautiful maiden holding aloft a cup that swiveled, so that two could drink from the vessel and not spill a drop. He and the maiden were wed and today the Wedding Cup remains a prized bridal tradition and a symbol of love, luck, and faithfulness.

What is a Touchmark?

This stamp can typically be found upon the base of a fine pewter product. Some touch marks are intended as identifying marks, or as ways for pewter smiths to distinguish their works from others. Touch marks can include names, established dates, locations, and whatever other identifying information that the pewter maker wishes to add.

The touch mark on a pewter item will help establish the quality of that item with a high degree of confidence.

Silversmithing is the art of shaping and manipulating silver into objects that we use, such as vases, bowls, tea sets, eating utensils, and jewelry. Historically, goldsmithing and silversmithing were synonymous to one another. It was not until silver became more prominent and acceptable in society that the two occupations were separated.

Many of the tools used in ancient times are still used by modern silversmiths. Ancient tools that have been modernized for the silversmith include tongs, hammer, anvil, engraving burins, small mallets, large scales, weights, the ceramic furnace, and the blow pipe with clay nozzle.

Techniques used to join the silver together into the pieces we see today, include welding, soldering, and brazing.

The label of Sterling Silver indicates that a metal contains 92.5% pure silver. The remaining 7.5% is made up of other metal alloys, mostly copper with a possible trace of zinc. Although a harder metal than gold, sterling silver is considered pliable enough so that it is easy to mold and to hammer into the forms we've seen throughout history and to this day.

Sterling silver is the whitest of all the precious metals. It is best known for it's beautiful and gleaming finish. The many products made of sterling silver range from elaborate serving pieces, tea and coffee sets, and an abundance of jewelry ranging from fine pieces with gemstones to street vendor ware. Many sterling silver fine gift items are heirloom quality and are passed down through generations.

The name "sterling" is derived from a 12th-century story, in which as payment for cattle, an association of eastern Germans paid the British with silver coins they had dubbed "Easterlings." Eventually this name was shortened to "sterlings", which is still used today.

What is a Hallmark?

A silver object that is to be sold commercially is stamped with one or more silver hallmarks indicating the purity of the silver, the mark of the manufacturer or silversmith, and other (optional) markings to indicate date of manufacture and additional information about the piece. This is prominent in Europe and not so much in America or with American silversmiths.

Hallmarks are applied with a hammer and punch, a process that leaves sharp edges and spurs of metal. Therefore, hallmarking is generally done before the piece goes for its final polishing.

What is the difference?

The difference between these two popular choices for drinkware and fine gift items, comes down to material composition and perceived value in home collections.

History of Glass and Crystal

The very first glass known to stone age people which was used for making weapons and decorative objects, was obsidian, black volcanic glass. The earliest known man-made glass dates to around 3500BC, with finds in Egypt and Eastern Mesopotamia. Discovery of glassblowing around 1st century BC was a breakthrough in glass making.

The first glass produced in the Americas was in Mexico in 1535 and Argentina in 1592. Neither of these glassworks were popular due to the small population and lack of demand. Virginia was the first English colony to start glassware in 1608 near Jamestown. However, the Jamestown glassware closed after only a year. The Dutch operated two glassworks in the 1650's in New York (New Amsterdam at the time).

British strongly opposed these early American ventures. It was not until the Revolutionary War in 1783 followed by the war with Britain in 1812 together with the trade embargo on British goods, that American glass manufacture really took off. Between 1790 and 1820 some 63 glasshouses were set up.

In the first half of the 19th century the market for glass items significantly increased as the population in the United States grew by the millions. Glassmakers introduced new manufacturing methods to increase production and meet the ever-growing demands. As a result, mold-blown glassware became common in American households.

Welcome, crystal! About the middle of the 19th century the glassworks in Eastern America switched to luxury, cut, lead crystal glass, which is still popular today and in high demand. Although the cost of manufacturing had increased, offering crystal products at higher price points helped manufacturers to help cover those expenses. Crystal is considered a luxury item and is popular with collectors and admirers, and to express appreciation with gifts, across the globe.

Let Us Wrap Your Gift and Enclose a Personalized Card 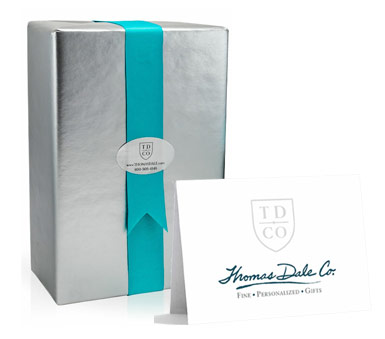 We can wrap some or all of your order and include a personalized card:

Simply choose Gift Wrapping from the Shopping Cart page and add it to your order.

Get 30% Off All Glass and Crystal 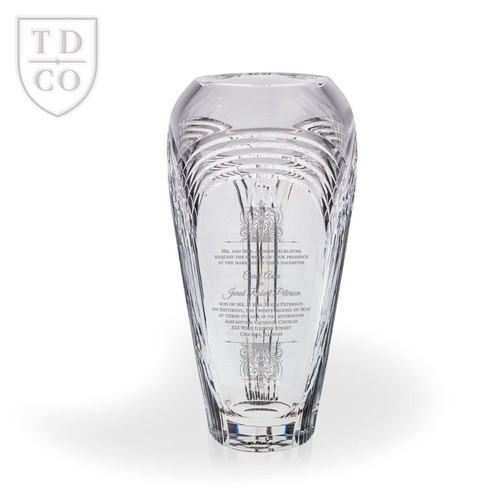 30% discount off posted price on crystal products only.

Discount will be applied per applicable item after product(s) are added to your cart.

Offer is not good on prior purchases. Returns on discounted products with receipt only, and only through Jan 10, 2023.